I’m a Los Angeles-based entertainment journalist and editor, currently covering breaking news for E! News at NBCUniversal. My writing spans from film and TV to TikTok and politics.

Previously, I was Associate Editor at The Hollywood Reporter, where I wrote breaking news articles in lifestyle, fashion, beauty and culture that were published online at THR.com and Billboard.com. For THR’s weekly magazine, I reported and wrote print features about film, TV and award shows, and reported live from red carpet events, including the Grammys, the Golden Globes and film premieres. Another responsibility was curating, writing and editing THR’s Style newsletters each week for our email subscribers. I increased subscribers by 37 percent year-over-year.

My journalism experience also includes interviewing A-list stars, industry executives, costume designers, makeup artists and other experts on L.A. culture and Hollywood for print and digital articles. And, since 2020, my freelance writing clients have ranged from streaming sites to educational institutions.

During quarantine, I’ve been keeping track of the TV series, films and books I’ve consumed (because I’m obsessed). Just a few of my recent favorite shows have been High Fidelity, Love Island, Killing Eve, Schitt’s Creek and BuzzFeed Unsolved, but I’m always open to a new binge watch.

I was raised in a small town outside of Portland, Oregon, and graduated from UCLA with a degree in communications and a minor in environmental science. While in college, I interned at TravelAge West and Family Getaways travel magazines.

I additionally worked as an arts editor of UCLA’s award-winning and independent student newspaper, the Daily Bruin, for three years. I was hired as the Lifestyle editor, the Arts and Entertainment editor and then the Content Editor of our arts, culture and lifestyle magazine called Prime.

For three years, I served as the Editor in Chief (as well as social media director and marketing director) for UCLA’s top-ranked chapter of HerCampus.com, the #1 online magazine for college women globally. I interned at the headquarters in Boston as the Viral Section Editor and national writer in 2017.

Beyond journalism, I’m passionate about TV shows, traveling, sustainability and education. I caught the travel bug after a summer study abroad program to Paris, which I blogged about on my site Lost With Lindsay (which I’m sure what not nearly as popular as Emily in Paris was in October). Since then, I’ve written about visits to England, Italy, Belgium, Japan, New York, Boston and more.

Here’s a look at some sites where my work has appeared (clicking will take you to stories or author pages): 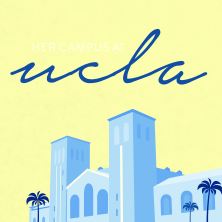